"This is my face." - Staghorn reveals the truth about his helmet.

Staghorn (or simply Stag) is level thirty-three. He wears green iron armor and likes it so well that he has no intention of ever changing it. He belongs to a guild named Reluctance, which role-plays all the time, and he takes his role-playing very seriously.

After spending hour after hour with his guild-mates, tagging “–eth” to the end of every word and throwing out nuggets like “dost”, “thou” and “forsooth”, Staghorn will often hang out with his friends Oxhorn and Mortuus to relax. Mortuus, however, tries hard to make Staghorn’s relaxation hardly relaxing.[1] 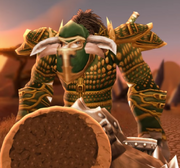 Stag with a giant pecan pie as seen in Into the Tin.