Not to be confused with the man behind the character, Brandon M. Dennis

"It's the demon-spawn reindeer from hell!"
—Oxhorn enjoying the holiday season.

Oxhorn (or simply Ox) was raised in Mulgore, and didn't have a particularly interesting childhood. Oftentimes people will say that they are related to Thrall or Cairne or some other prominent figure in some way, like being Thrall’s nephew’s cousin’s tutor’s massage therapist, but Oxhorn isn't related to anyone special. No, his parents were just two hard-working Tauren that lived perfectly hum-drum lives.

Now that he is grown, Oxhorn likes to spend his time riding his kodo Busco, joining his friends for a drink at the local pub, perpetuating hatred towards all of elf-kind, and shooting little movies. He has been in a lot of movies, and has played a number of roles, but he is best known for the grammatical escapades he has undertaken with his friends, Staghorn and Mortuus. Oh, and just to clarify: no, Oxhorn does not hate gnomes. They are just so small and puntable, that it is hard to resist harming them. But don't be confused! He really does hate elves.[1]

As seen in Inventing Swear Words 2.

Ox and Stag in The Joy of Punting Gnomes. 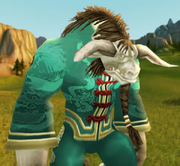 Oxhorn in the climax of Into The Tin.

Ox riding on Bosco as seen in Ox's movie Into the Tin.

How Oxhorn would look with the new model by fan Majinjustin.

Ox and Stag from Into the Tin.