Hat is a singing turtle. He was born in a little pond in The Barrens, but he could not relate to the other turtles. They all wanted to eat crickets and worms, and while crickets and worms are all fine and dandy, all Hat really wanted to do was sing. As far as turtles go, Hat sings fairly well, but poor Hat can hardly compare to professional singers.

But that doesn’t bother him! No sir, if Hat wants to sing, Hat will sing, and there is nothing that can get in his way!

Except for Barnaby, who can’t stand his singing.[1] 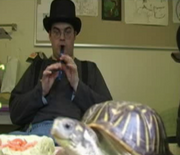 Oxhorn seen serenading the real life Hat at the of Inventing Swear Words 2.5